There are so many positions for seniors these days, you’d think that ageism was a thing of the past. From my LinkedIn feed, here are just a few:

And you thought there was age discrimination.

Just joking. Of course, there is. Also racial discrimination, the legacy of our original sin of slavery. One can despair, or one can hope for better times.  Our young friend Paul Cato, who grew up three doors down from us and is now working on a doctorate at the University of Chicago, recently chose the latter in his webinar talk to 240 fellow Swarthmore alumni.  Paul is a deep thinker, always has been, and he is wise beyond his years. His thoughtful talk is titled “James Baldwin’s Philosophy of Optimism and Active Love.” You can watch the video by clicking here.

I was honored on Oct. 12 to tell the story (via Zoom) of Five for Freedom: The African American Soldiers in John Brown’s Army to the  Minnesota Valley – North Ulm Civil War Roundtable. To watch it, click here.  I’ll be speaking in person on Tuesday, Nov. 16, at the Woman’s National Democratic Club in Washington, D.C.  My subject: “Present at The Post: From Watergate to Chesapeake to Harpers Ferry.” To learn more about the event, please click here.

Also forthcoming:  The 2021 issue of B’nai B’rith Magazine, which I’ve edited now for 12 years, goes online and in print in a few weeks. It’s a packed issue, with a cover story on Israeli TV shows streaming worldwide. (Think “Shtisel,” “The Beauty Queen of Jerusalem,” “On the Spectrum, ” “Fauda,” and others.)   In a dozen years as the editor, my writing has largely been limited to an author’s note in each edition.  Otherwise, I’ve written just three features: The Jews of Berlin (Spring 2012 ), Monica’s story (Winter 2017) and, now in the new issue, the improbable saga of my dermatologist, Eric Finzi, whose grandmother and father fled fascist Italy in 1944 on board a U.S. troop ship, with 981 other Italian Jews — in our country’s only rescue mission of European Jews during World War II. (The Finzi name will be familiar to those who remember the 1970 Oscar-winning picture “The Garden of the Finzi-Continis.”) They wound up interned in an old army camp in Oswego, N.Y., on Lake Ontario. When the war ended, they were supposed to be sent back to Europe, but President Truman ruled otherwise. My doctor’s father and grandmother moved to Queens, New York, his father married, and Eric and his sister were born.  Eric literally owes his existence to photojournalist Ruth Gruber, who, then working for the U.S. government, spearheaded the rescue effort and accompanied the refugees on their voyage. She died in 2016at the age of 105.  It’s a remarkable story, and I’m honored to tell it.

Elsewhere, my interview with Washington Post book critic Michael Dirda is scheduled for the January issue of Bethesda Magazine.  Michael has been writing for the Post since 1977 and his reviews now appear every Thursday in the Style section.  He lives in a modest house with a large yard in Woodside Park, in Silver Spring, with his wife Marian, who retired as senior prints and drawings conservator at the National Gallery, their youngest son, Nathaniel, 31, and some 15,000 books, which are in stacks, on shelves, in boxes and just about everywhere.  Having grown up in a house of 25,000 books, I had an eerie sense of deja vu touring what he calls his “Aladdin cave of wonders.” It’s not the well-ordered Trinity College library in Dublin, he correctly observes. Rather, it’s chaotic, and he sometimes cannot find a particular book.  Unlike my father, Gerard Previn Meyer, who could find any book among the piles in our house, like the proverbial needle in the haystack.

Finally, work progresses on what I call my Previn Project, the dual (and sometimes dueling) biographies of my great uncle Charles Previn, whose show business career  took him from vaudeville to Broadway (where he conducted for George Gershwin’s first musical) to early network radio to Hollywood (as musical director for Universal Studios) to Radio City Music Hall (where he ran the show in 1946-1947), and cousin Andre Previn, the German-born young wunderkind, multiple Oscar nd Grammy award winner, who came to America and to Hollywood in 1938 with this parents thanks to Uncle Charlie, who helped them escape the Holocaust, and got Andre started at MGM  on the road to fame and fortune–and tabloid headlines with his five marriages and five divorces (including to Mia Farrow), and ten children, before he passed away in February 2019. Andre is remembered, Charlie largely forgotten. I aim to fix that imbalance for family and for history. 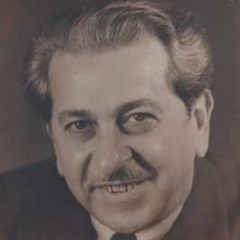